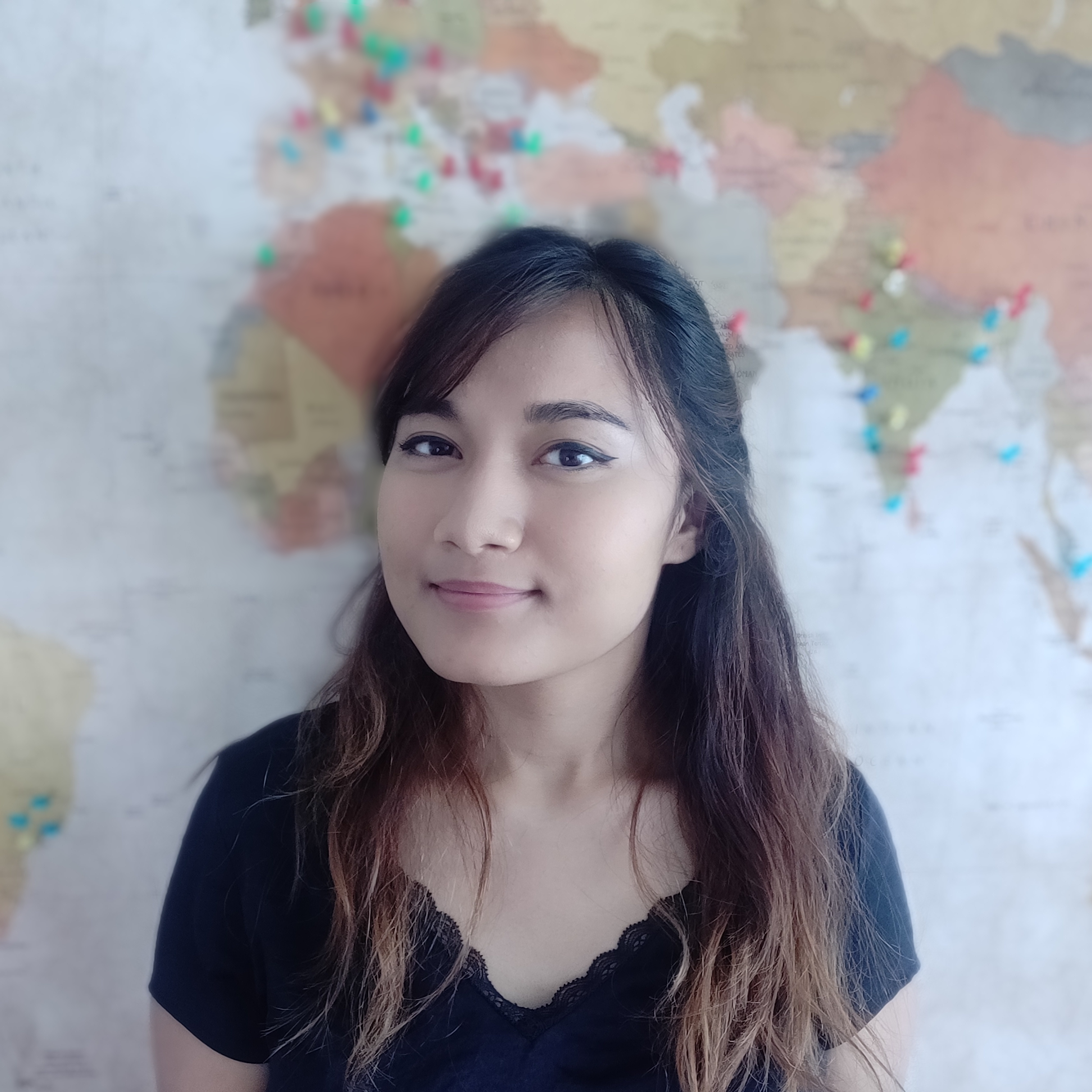 As a child it was often hard for anyone, including myself, to understand the dual nature of my personality – my brain had two vivid sides fused into one: an artist’s and a scientist’s. I initially fell victim to the definitions set by society and at the age of 18, I chose to pursue Physics, giving up my seat at a prestigious school of design.

Years later, after experimenting with all kinds of scientific fields, I realised that I was always gravitating to the artistic aspect of the subject at hand. In Biology, I was enthralled by bioluminescent bacteria and their patterns. In Computer Science, I saw an infinite potential for algorithmic art, even those generated by AI. In Signal Processing, which is a big part of my PhD on satellite signals, I was fascinated by the patterns made by the original geometric signals and the noise that the signal accumulates – the beauty of Fourier Transforms and the Gaussian curves!

I realised that Science and Art are not orthogonal entities but simply complementary ways of experiencing Nature: one pragmatic, the other imaginative. One of the people whose work inspired me was Antonio Gaudi, and his nature-inspired works of architecture. I am now experimenting with various media in creative projects that mix technology with art. Professionally, I engage in artistic endeavours through commissioned works such as paintings, logos, banners and posters. I have also illustrated for magazine covers and articles. Also involved quite actively in social outreach, I am an ambassador of the L’Oreal-UNESCO Girls in Science initiative, as well as part of the Space Generation Advisory Council (SGAC), an organisation serving as a link between young professionals in Space with the United Nations. With the SGAC we are currently organising an event commemorating Women in Aerospace. The logo for the event as well as the promotional material would be my art project. I am also a part of the IAF Technical Committee on the Cultural Utilisation of Space (ITACCUS).

When I discovered that the third angle of obsession in my story – Space – was in fact a highly interdisciplinary field, I finally found a valid context for experimenting with Art and Science. “Bhédadīpikā” is one such attempt at mixing Art, Space and a bit of technology. It is one of my few submissions for a formal exhibition with other artists, and with what a grand gallery: The Moon! Through this work I experiment with the final duality of my own character: Artist/Scientist. I also add to it my other passions such as programming, learning languages, and experimenting with mixed media.

SUBMISSION: Bhédadīpikā - An Illustration of Duality

The concept of Duality has intrigued mankind since the beginning of civilization. This work plays upon several notions of Duality such as Constraint/Freedom, Light/Darkness, Minute/Infinite, Reality/Illusion, Randomness/Intent. The artwork comprises of two objects constrained inside a 1cm³ box: a strip of paper, and a nano-sim card.

The paper strip consists on one side, a 9-step lunar-phases illustration, and on the other side is written the word ‘Moon’ in 24 languages from across the world. The lunar phases are coated with a phosphorescent material: in the presence of light the phases reflect it, and in darkness is emitted light absorbed earlier. The natural uneven surface of the extremely crude phosphorescent substrate gives the impression of craters on the lunar surface as seen from Earth. The 24 words in different languages displaying the word “Moon” are hand-written with a 0.4mm gel-ink pen. In fact, the entire strip is handmade, and without the use of magnifying lenses – challenging the physical limits of the artist’s hand-drawing skills with the tools available. The strip is folded in a zigzag shape, with the width of each “page” increasing towards the center. The Moon phases then fit naturally in the structure, that also results in a tapering shape that snuggly fits in the space not occupied by the nanochip.

In complete contrast, with a capacity of 4Gb, the nanochip (0.8cm x 1.2cm x 0.1cm) metaphorically represents the infinite possibilities of digital space, limited only by imagination. The chip contains animated images of a series of algorithmic art titled “Star Cities/Organised Worlds”. These images are created by randomly generated points, but which are constrained to appear on a path defined by equations of hypotrochoids of various parameters. A hypotrochoid is basically the path traced by a spirograph, and is one of the fundamental curves depicting movement in Nature: from celestial orbits to rolling objects. They instill a sense of harmony in the spectator, as the form is naturally pleasing to the eye. The artist imagines that if intelligent life were able to manipulate the formation of galaxies, it would exploit the humble hypotrochoid for inspiration for harmonious forms. The nanochip has the perfect size to fit diagonally inside the cubic box. The paper strip then would fit either under or over it.

The nanochip would also contain a graphic software that would allow the spectator to create their own designs, with an optimised algorithms. This could be used by the crew of IMMIHS as a recreational tool, and as a point of discussion on the dual nature of things, and thus as a means for engaging in cultural activity. The paper strip can be used as a charm worn around the finger, or as a luminescent sticker for finding objects in the dark – the phosphorescence can last a few hours. The nanochip itself could also be useful for storing data collected during the mission (a larger capacity chip can hold more information). 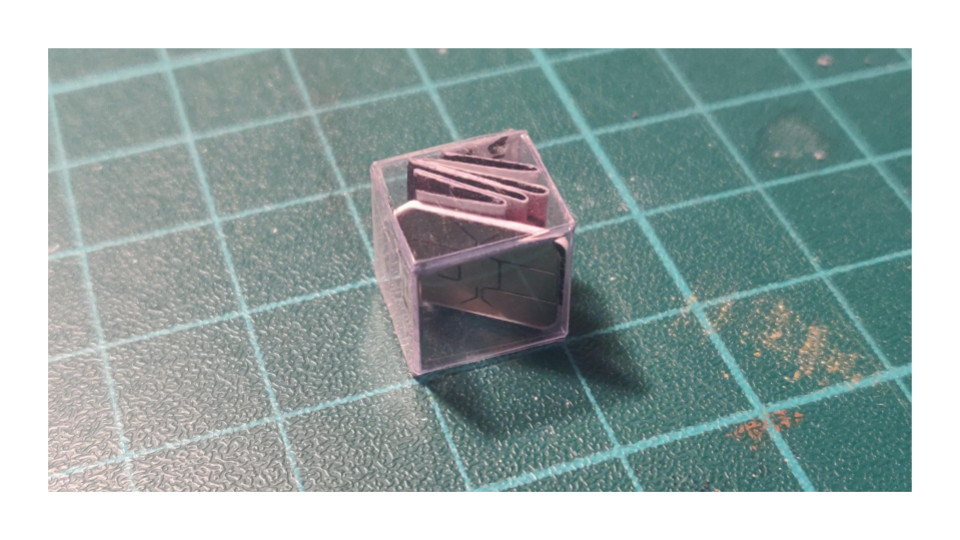