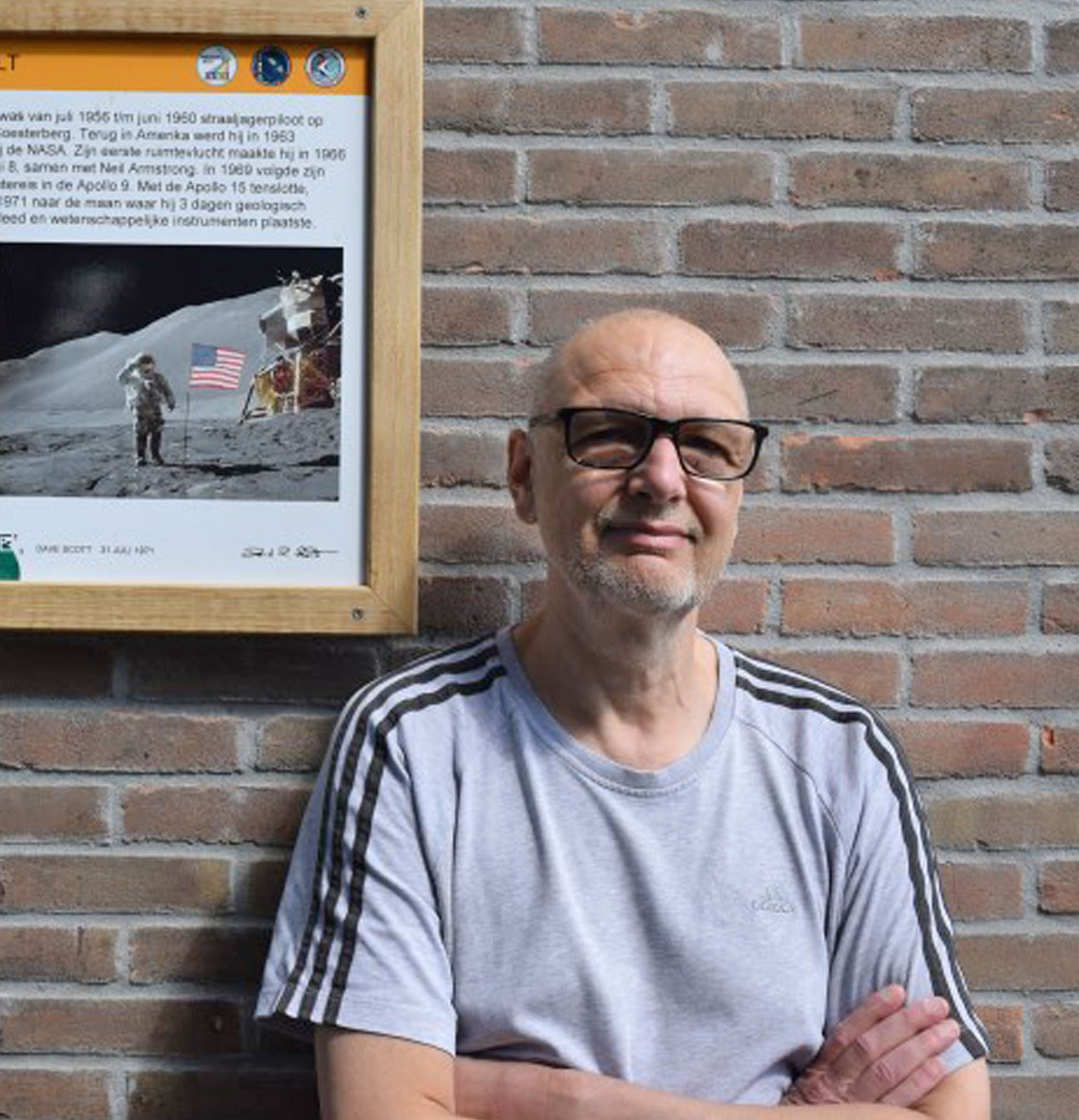 I work with language and images. Essentially I make artists’ books in which I let words and images compete with each other. They have a cohesion that demands to be discovered. ‘Abstraction’ is the obstacle that must be overcome. Therefore, my books have to be considered a niche. They are for the enthusiast. The individual images are also for sale. I prefer to print them on aluminum.

Ever since my childhood, I have been fascinated by the moon. It regularly plays a prominent role in my art. For me, the moon is a metaphor for the unknown and the mysterious. As an artist, I feel like an explorer. I’m following what Apollo 15 astronaut Dave Scott said when he stepped on the moon as the 7th person: “Man must explore.” Hopefully, my art will encourage this, too.

SUBMISSION: In the beginning was the Word.

The word “maan” (“Moon”) became part of our earthly culture through the Proto-Indo-European
“mḗh₁n̥s” → Germanic “mēnô” → Old Dutch “māno” → Middle Dutch ”mane”/”maen”. “Maan” has helped the way we view the world and the universe and still stimulates us to technological progress (such as being able to go to the Moon). Just as our prehistoric ancestors did at the sight of a fascinating night sky with a mysterious “mḗh₁n̥s”, astronauts in space also searched for words (or remained speechless) to express their impressions. Especially those who had been to the Moon. Some tried to describe their experience outside of Earth’s atmosphere with phrases in ‘1G words’ such as, “Magnificent desolation” (Apollo 11 Buzz Aldrin) and “Oh, this is really profound” (Apollo 15 Dave Scott). Back on Earth, the Moon had changed these space heroes forever. Therefore I think in the future
community of lunar settlers, terrestrial words will evolve into extraterrestrial words. Powerful words that are still unknown, but with which humans in a dangerous and breathtaking 1/6G environment someday will express themselves. “1/6G words” will help give meaning to a lunar civilization and make it successful. One day there will be reading boards in 1/6G classrooms.

‘Maan’ (‘moon’) was the first word I learned to read and write. This is the reading board that taught me that. As a readymade, it has been transformed into Stanley Kubrick’s monolith.

1963. I was six years old. My first day at school, my first class, a reading class. Reading boards hanging on the wall in the classroom. The first board showing the moon with a word below. The teacher asking me what word it is. I don’t know and I don’t answer. I cannot read. Behind me, a classmate whispers ‘moon’. “Moon,” I say.

It was as if the word itself spoke to me. Note: had it whispered ‘tree’ or ‘house’, I would have repeated it.

I got to know the word “maan” early in my life. According to Daniel C. Dennet in his book “From bacteria to Bach and back: The evolution of the mind” (2018), every time seeing the Moon together with my parents saying “maan” I copied “maan” in my mind over and over again and learned to pronounce it. This cultural evolutionary process is similar to when our distant ancestors began to formulate words. Like them, as a twentieth century toddler, I was unaware using words. I associate my conscious use of the word “maan” with the moment in the movie 2001: A Space Odyssey, the monolith appears. The scene a humanoid throws up a piece of bone which transforms into a space ship, is to me my very first reading lesson.

Our distant ancestors saw a fascinating spectacle in the sky. The word ‘moon’ is a surviving expression of this. An ‘evolutionary artifact’. It tempts us to go (back) to the moon and beyond, on a way to unknown words.

The ‘moon’ reading board is now in the possession of my oldest grandson. He is very interested in rockets and the universe. He received his first reading lesson in 2019. 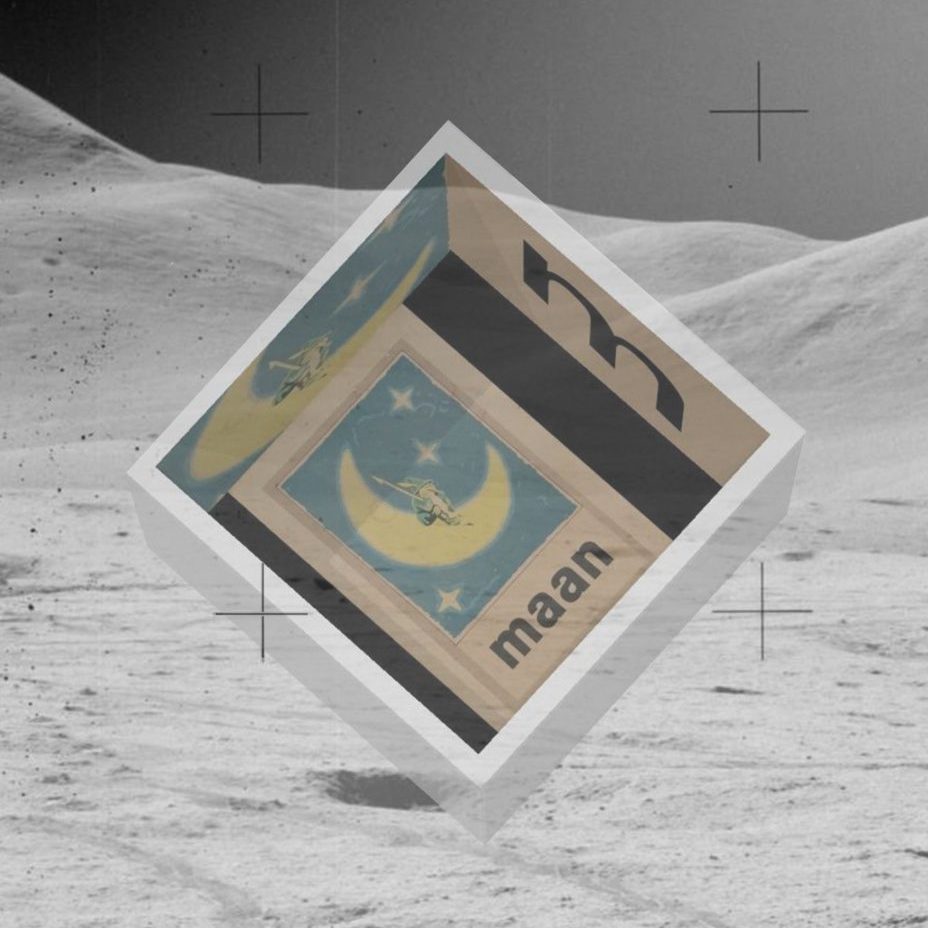 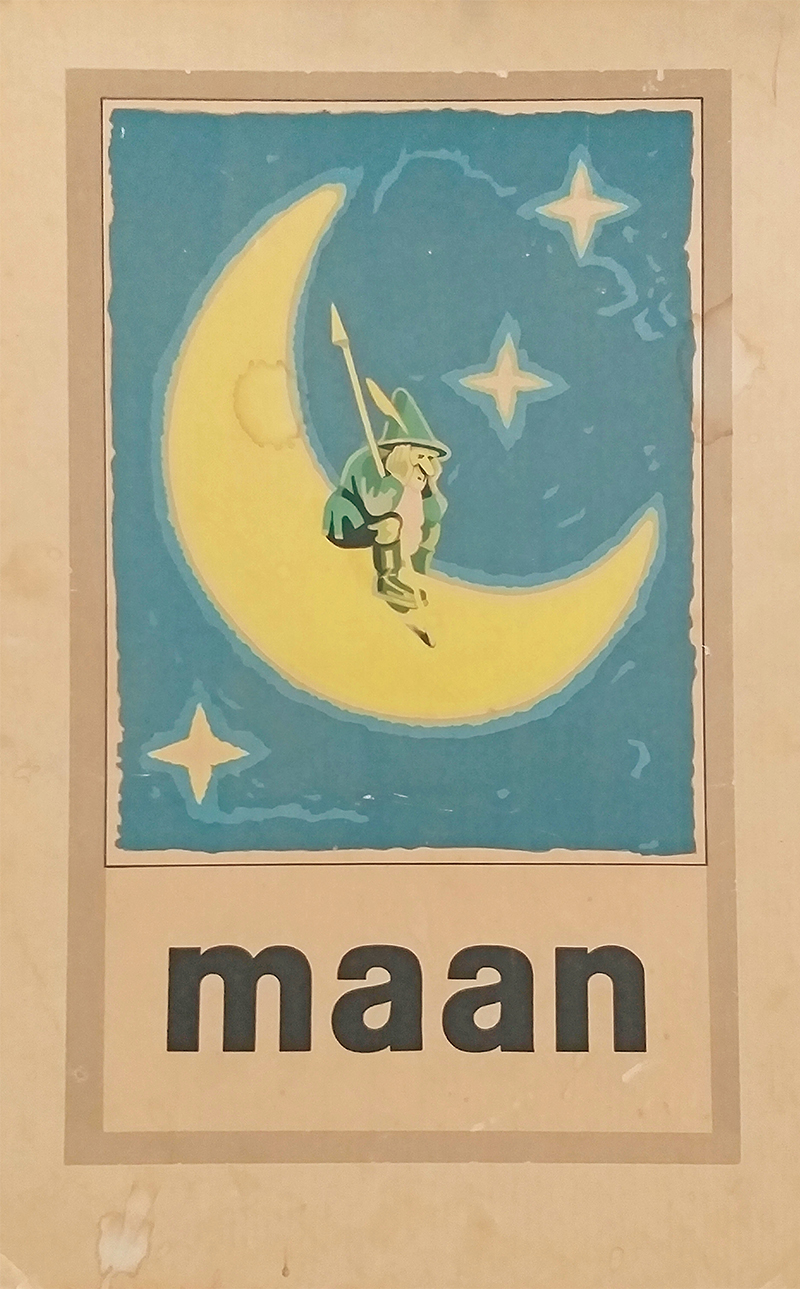 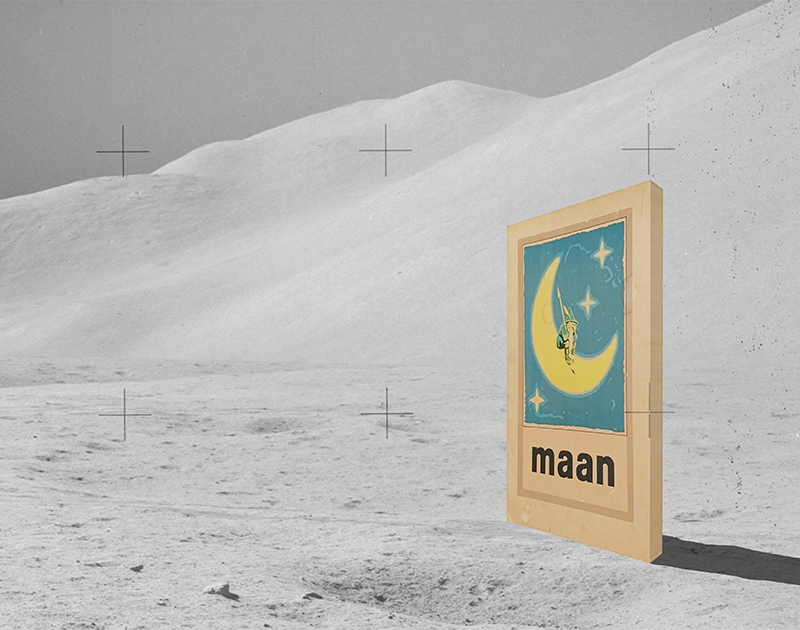