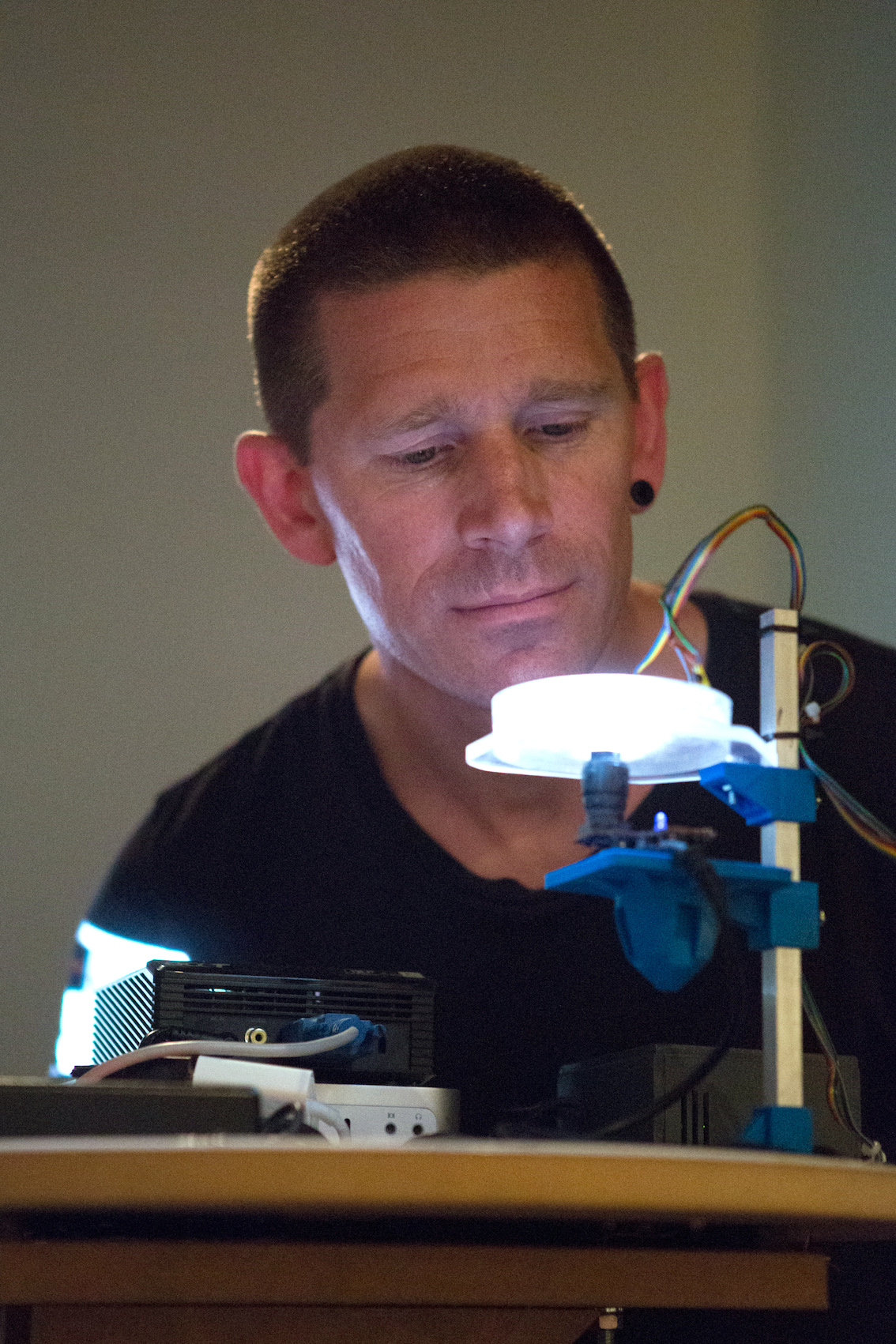 My artistic practice is characterised by an in depth engagement with process, scientific methodologies and the nature of experiment. Here ‘experiment’ refers both to the act of acquiring knowledge and information through testing scenarios, and to the act of trying unknown or untested processes.

For a long time my work was concerned with the information systems contained within living organisms and ecosystems and how they may be processed through technology with the aim of creating relationships and meanings. This work reflected on the ideas of ‘umwelt’ and biosemiotics as developed by Jakob von Uexkull and Thomas Seboek in as much as it aimed to explore how signs, symbols and signifiers may form a common ground between artificial and natural intelligences. The notion of critical information and signifiers in organic perception has remained central to certain areas of my research and projects even as it moves into new areas.

One of my lines of inquiry stems from an interest in using organic cultures as processing systems for artificially generated, or technology based, data in an effort to provoke behaviours that contain meaning. This interest extends to examining how organic and inorganic systems can be wired together through various channels, where communication and presence are realised by agency. The projects emerging from this process are staged as simulations; inserting organisms into non-natural or extreme situations, frequently as propositions for astrobiological experiments. In recent years my work has led me to cultural analysis of the science of astrobiology and life science research in the space environment. This pathway has also led me to develop projects that examine how we see ourselves as a post-terrestrial society and how we strive to understand the universe around us.

This process of investigation has led me to use a variety of approaches to robotics, artificial intelligence and biological practice. My research has led me through a diverse range of fields including microbiology, astrobiology, satellite and space exploration, wilderness exploration, hiking and mapping, as well as the majority of more established digital art practices including coding, video and sound production.

Increasingly I have been engaging directly with the realities of the relationship between the arts and the sciences, specifically how their differences can be exploited to generate moments of artistic value. While following rigorous scientific methodologies and maintaining a strong critical viewpoint my work is faithful to traditional artistic principles of metaphor, ambiguity and a strong sense of wonder. My intention is that the artworks and associated aspects of my practice stimulate the discussion of how and why we acquire knowledge through the cultural activities of art and science, and about how we choose or not to apply that knowledge.

LAC3B_g10 replica is a 5mm long replica of a piece of comet hand carved from meteorite NWA8131, a 39.8g carbonaceous chondrite meteorite discovered in North West Africa in 2013.

The replica was made as part of the project ‘You First Saw the Light’ – a study of a fragment of comet measuring 50 microns (0.05mm) across, collected from the stratosphere by a NASA high altitude research aircraft in 1985. Officially named and catalogued as LAC3B_grain10, the origin of this tiny piece of material is probably in interstellar dust clouds that pre-date the formation of our Sun. Its current residing place is in a glass vial in a drawer in the Department of Planetary Sciences of the Open University of the UK.

The particle is here on Earth, although denied full contact in order to maintain its scientific importance. It must remain in a certain state of detachment, isolated from the complex webs of material that make Earth what it is and that define comets, asteroids and cosmic dust as something ‘other’. It is here, but it is not here.

Part of the project is a 4 channel video of the comet fragment under a microscope, changing focus at 1 micron intervals from various angles. Another part is exploring ways of figuratively or metaphorically reinserting it into orbit. In the main work, a replica is filmed rotating against a ‘blackest black’ background. For this project it gets a step closer to being once again in space.

For LAC3B_g10 reinsertion 2, another replica would be made and would be encapsulated in a 1cm cube of PDMS silicon or clear resin. 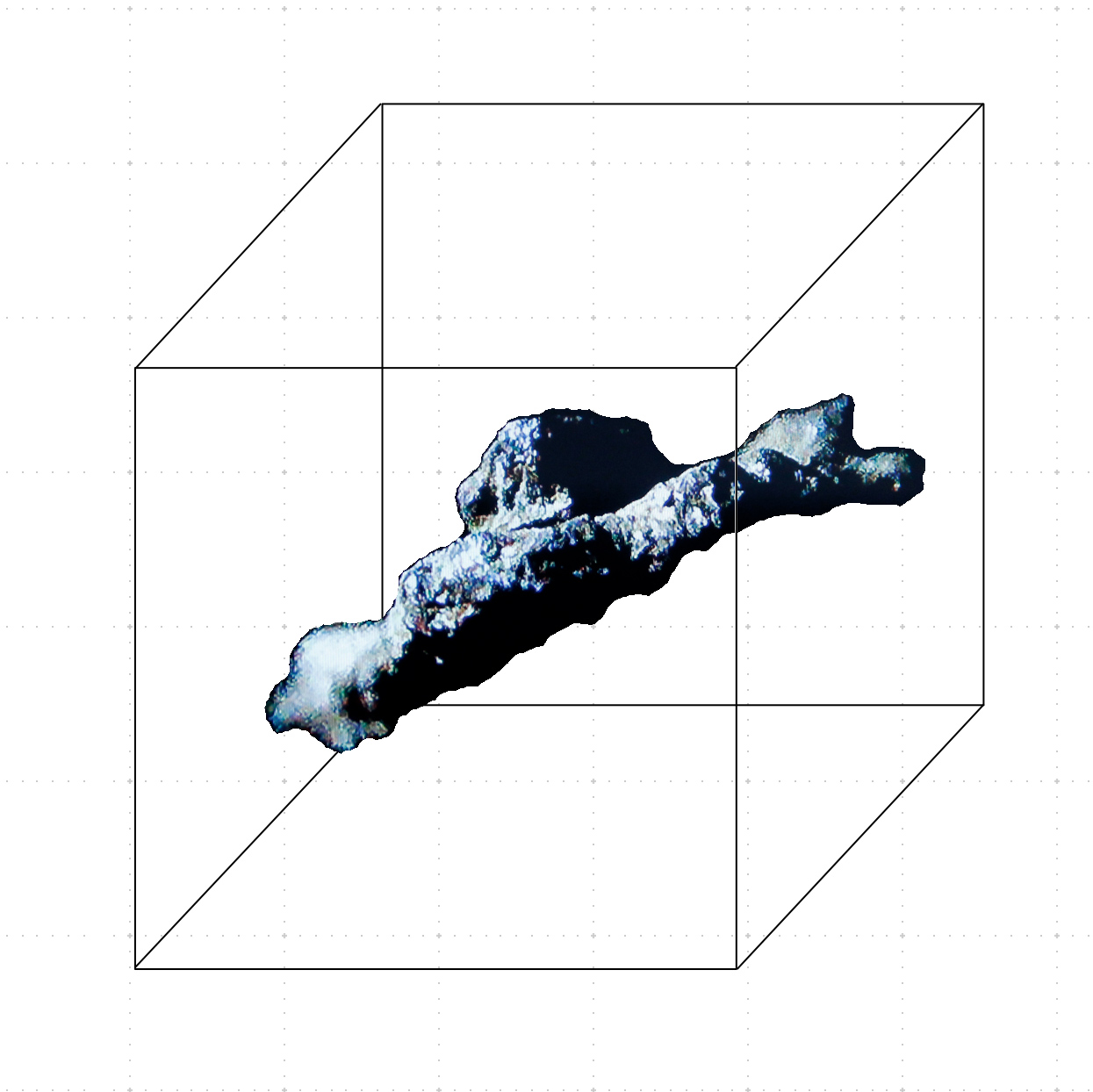