Eva Petrič, born in Slovenia, lives and works between New York City, Vienna, and Ljubljana, creating works in photography, video, performance, installation and writing. In New York, Eva is presented by Galerie Mourlot – New York. She holds a BA in psychology and visual arts from Webster University Vienna, and an MFA in new media, from Transart Institute New York /Berlin. Her art has been shown in over 55 solo and 75 group exhibitions all over the world, receiving numerous recognitions and awards.

Eva has been selected already three times for Beijing International Art Biennale (2012, 2015 and 2017), and was nominated twice for the Venice Art Biennale (2013 and 2015). In 2019 she has been invited to the Cairo Biennale of Art. Her lace installations have been exhibited worldwide, from the St. Stephansdom in Vienna, to Centro Cultural Borges in Buenos Aires, Argentina, to the UN Headquaters in New York City and to the 5th largest cathedral in the world, the St. John the Divine Cathedral in New York City.

The span of my artistic practice reaches from photography and video to installation, performance and writing; at first glance, it may appear very broad. However, using various media seems indispensable to me. When moving from one cultural space to another, which has been “my way” since I can remember, I spontaneously reached for the media at hand to be able to communicate and be understood.
My motivation behind the use of the media now is to create space: physical space, mental space, visible space inside space, imaginary space, metaphorical space, all defined by the atmosphere. To me, the atmosphere of spaces, the atmosphere, which a certain space is able to bring about, is the most essential. Each media creates a unique atmosphere that differs from others, despite their common aim – to communicate. Photography, equalizing past and future into the present, along with recycled laces – which I build up into large scale in situ assemblages and attempt to transform an existing space and atmosphere with – defines me best at present. I am interested in creating spaces and so I strive to make photographs or three-dimensional lace formations, be these in the form of images or installations, that are by themselves powerful enough to change the space around them in such a way that they suck viewers in.  From the existing spaces, I am challenged to develop new space(s).  I take the space and develop it further, by extending it, changing it, adapting it to an already existing space, out of which or inside of which potential exists for even many more spaces. I am interested in the phenomena of exponenting  – on how may exponents I can reduce a certain existing physical space and/or transform it into many more. By “playing” with various perspectives that are enabled to me by using various media, from photography, performance, literature, installation to video and film, I try to acquire the characteristics of a bird, aiming for the clouds!

The story of DBE Data Bank of Emotions began four years ago when I was invited to take part at ESA ESTEC Lunar Simulation Mission at Nordwijk (May 2015). There, I experienced the feeling of isolation that one might feel in vast outer space. This led to my proposal of an art project which would help alleviate the feelings of isolation and connect astronauts with Earth. I proposed my lace figure „stem cell“- as a Tattoo and a fragrance DBE data bank of emotions, to keep astronauts on space missions in tune with the Earthling in them…

The proposed DBE – Data Bank of Emotions – Earthling Tatoo Seal is the 3D form of my Stem Cell Potential image. This image stems from my Gr@y Matter- language of Shadows project in which I explored the communication abilities of shadows. For this purpose, I borrowed the Periodic table of Chemical Elements from the natural Sciences and replaced chemical elements with my shadow images visualizing emotions.

Transferred into a lace pattern, my Stem Cell Potential figure visualizes and expresses the interconnectivity within our own selves – our bodies when viewed on the cellular micro level; and within our society on a macro level,  among societies on a planetary level as well as on the level of stars at an intergalactic level. We are all part of the pattern, similar to lace, where everyone is connected, sustaining and being sustained by a yet bigger pattern.
Stem Cell Potential is a TOTEM to the many and often invisible ways we are interconnected amongst each other, showing and rejoicing the potentiality arising from this which is existing within each person.

My Stem Cell lace figure shows not only the zig-zags and twists and turns of life but also the interweaving myriad of connections that form human society and connect humans, just as love does. It shows further that we are like threads, caught in loops of emotions in patterns of past and future generations of human society. Thus, it seems to me to be the perfect seal with which to confirm the presence of the human, of “the Earthling” in the astronauts, wherever they might be. 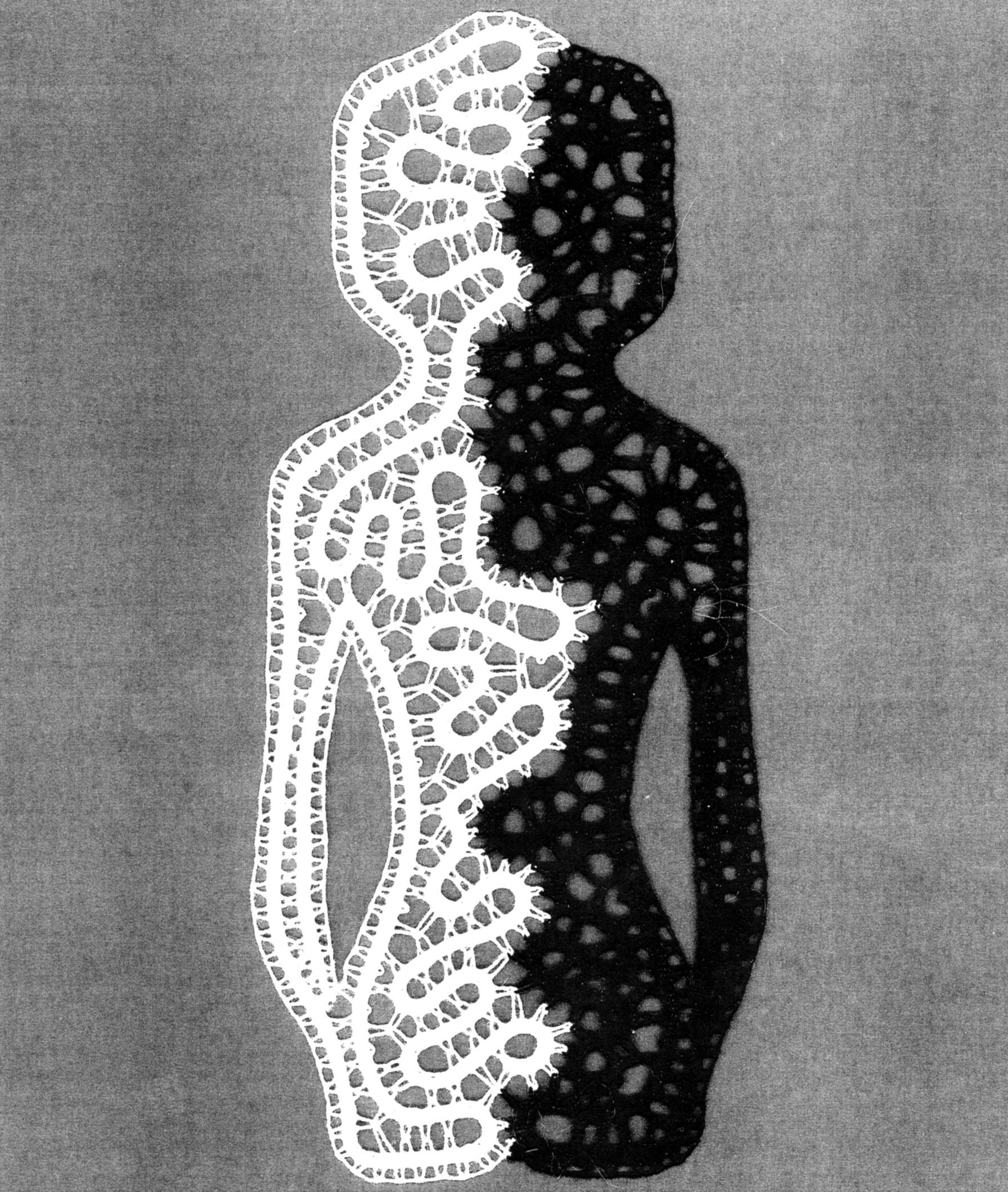 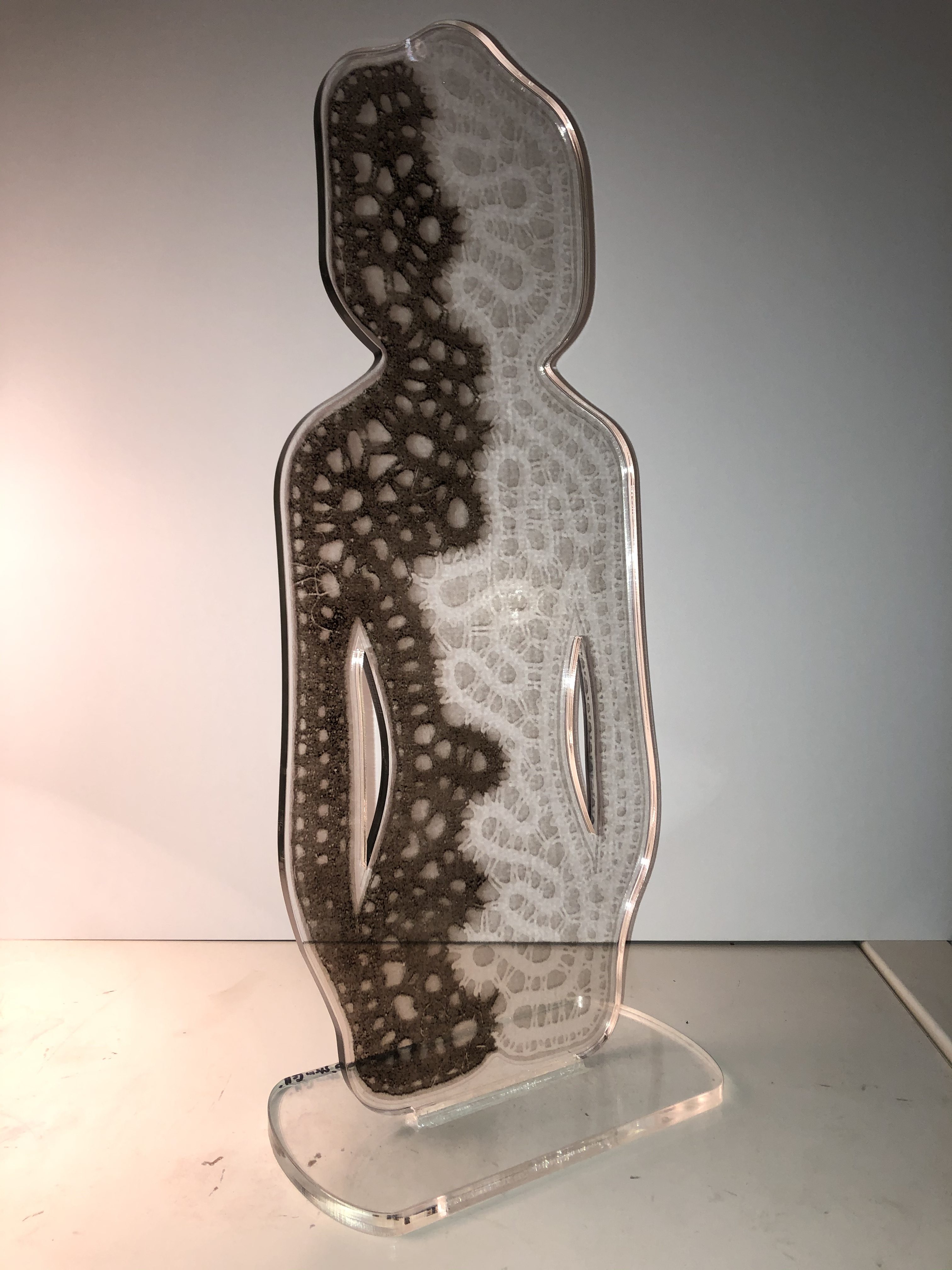